Her skin was velvety, so smooth and shiny. Her physique was voluptuous, with curves in all the right places. Her feet were dainty and perfect. Best of all, she was just so sweet on the inside, maybe even a little nutty. I was reasonably chuffed with her!

Of course as beautiful as she looked I couldn’t resist sinking my teeth into the pistachio macaron I had just made, and she was as delectable as I hoped. Earlier in the year I had won a private cooking lesson and after a number of re-scheduled appointments I finally had my lesson at the home of Chef Diane Antonessan. She given me a few choices as what I could possibly learn, but I wanted something quintessentially Parisian, and known to be extremely difficult – the quant macaron biscuit.
Now, if you haven’t ever tried a macaron before, do yourself a favour, get on a bus and get one. I’m really not much of a sweets/pastry kind of gal (probably a good thing in Paris), but these little cookies are something else. The shell of the macaron is smooth domed shape and is effectively a meringue, with an exterior which is only just firm, but gives way to the soft velvety interior that melts in your mouth. It has ruffled edges which are referred to as the ‘feet’. Once you’ve reached the centre of the macaron, you will come across a delightful filling which can be various, but on this occasion was a ground pistachio buttered cream. The slight nutty richness coupled with the lightness of the cookie, made for a very yummy treat. 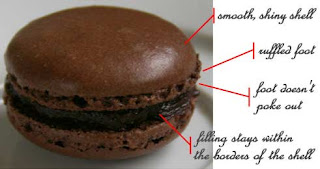 The history of the macaron and how it came to Paris is a little sketchy. However, for all intents and purposes, the Parisian macaron we know and love today is attributed to Ladurée. Ladurée’s patisserie is perhaps the most famous in Paris, with lines of tourists stretching for kilometres all vying for an opportunity to buy the little delicate biscuit (www.laduree.fr). Generally the macaron comes in a number of traditional flavours, like pistachio, but also chocolate, vanilla, hazelnut, raspberry, but now Parisian patisseries are getting inventive with the likes of liquorice, wasabi, and olive oil (which is actually really yum by the way).
What makes the macaron so precious is that they are difficult to make. Difficult because there are so many points in the process where things can go wrong, and you simply won’t know until the end whether it has worked or not. There are also many superstitions when it comes to making them as well, like you have to open the oven 3 times during the baking process, or that you should use old egg whites (meaning separated for a least a day and kept in the fridge), or when you’re piping the mixture to make the shells, you should pipe directly vertical, anything less than this might cause it not to rise properly. Despite all of this, and the fact the cream filling just wasn’t quite the right consistency no matter the beating we were doing, I manage to make a reasonably good first batch. Well so I have been told by the various colleagues and friends that I distributed them to.
I’ve actually been cooking of a bit of French storm!
The following week I had another cooking lesson, this time as part of a birthday gift I bought for my friend Andrea. We were learning how to make classic French summer bistro food which included Fish ‘du jour’ cooked in papillote (fish baked and encased in a classic paper envelope), accompanied by Ratatouille, and for dessert, Cheery Clafoutis (individually baked cherry tarts of sorts). It was a great experience, and I learnt a few tips and tricks along the way.
The produce in France is of outstanding quality. Fruit and vegetables just taste so flavoursome. Not to mention that their dairy products are out of this world, particularly their cheese, but that’s a whole other post on its own. Of course, their breads are simply unrivalled, and accompanied by some traditional dishes like terrine, or boudin (black pudding sausage), I’ve had some brilliant meals.
So lately I’ve become inspired to cook and experiment again. I’ve began my cook book collection (only to add to the many books I have at home), this time it’s in French. One of my favourite books at the moment is for making Apero, which is a short for aperitifs or what we might call canapés back in Oz, except a canapé means a sofa here.
The French know how to do aperos, and they way they present them are like little works of art. To support their love of aperos, you can get all sorts of great crockery and cutlery specially for them. Mini terracotta pots to bake little individual quiches, or shot glasses big enough to a few decent spoonfuls of chocolate mousse – not a problem.  Want to place a handful of exotic salad into a bamboo boat type things, or have a selection of meats threaded on little decorative wooden skewers, just pop down to the local supermarket and pick up everything you need to make your party look like it’s been professionally catered for. However, picking up a decent tasting pre-made dip while you’re there, is not as easy. The French don’t really do dips. So I’ve taken to making my own, which is a good thing, because they seem to want to put crème fraiche (think thickened cream that a little sour) in everything – unnecessary calories.
There are still a few traditional dishes I’m yet to try, escargot (snails) being one of them, nothing against it, just haven’t gotten around to it, or the famously French duck for that matter. There are also lots of recipes for me to experiment with.
I think I now know why I’m a triathlete... it’s to balance my French way of life.