Sure, France isn’t exactly known as a great sporting nation. This of course excludes what Aussies would call “European” handball, or just handball here. The French Women’s team just won the World Handball Championship last week – whoo hoo to you girls! Actually, the French men aren’t too shabby either having won the World Championships at the start of the year, beating. Ok they dominate handball.

Yes, I must also concede that they recently made the final of the Rugby World Cup too. Narrowly losing to the All Blacks (some say they should’ve won). Although, as at 19 December 2011 the International Rugby Board still places Australia above France at second and third respectively in world rankings.

However, what the French really excel at… is having fun at sporting events.

They really get into the sporting spectacle. The best example of this was at the recent Rugby World Cup where the French fans were known for getting dressed up in elaborate fancy costumes. Beyond that, they drum up a lot of excitement and enthusiasm and I couldn’t help but laugh and clap with glee at a recent French Top 14 Rugby game I went to.

It was a grudge match between Stade Français, the Paris based side that sport hot pink as their jersey colour, (only would burly French men be able to wear hot pink and play sport!), and Racing Metro 92. I decided to adopt Racing Metro 92 as my side. They have a long club history starting off as an athletics club in 1882, then becoming Racing Club de France in 1885, adding a rugby section in 1890. In 1892 the first ever French Rugby Championships were staged between Racing Club de France and Stade Français. Racing won that game. Racing Club de France formed with Metropolitan Transportation Union Sportive, the sporting club of transportation drivers (train, bus, etc) of the Paris region in 2001, hence the addition of ‘Metro’. The “92” is the district number for Hauts-De-Seine west of Paris, where their home ground is based. 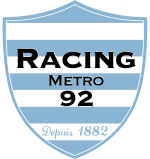 Racing Metro 92 was only promoted to the Top 14 league from the Division 2 competition in 2009-10, so the rivalry between it and Stade Français is well and truly back on. Racing’s most famous player is of course none other than Sébastien Chabal. A French international player (although not selected in this year’s World Cup campaign), an absolute giant of a man, and he has the most impressive caveman look which he somehow seems to make trendy. 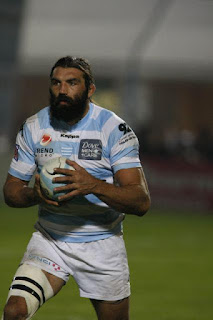 On exiting the train station at Stade de France, the 80,000 capacity stadium built for the FIFA World Cup in 1998 in a suburb outside Paris, I’m greeted by my French friend Benoît holding a pint of beer. Benoît, the boyfriend of my friend Andrea, is a rugby fanatic and player himself. We promptly grab a pint of beer for me from a kiosk in the street. I’m shocked that I can drink openly in public. Walking over to the stadium, beer in hand it feels even more strange.  We queue to get through the turnstiles, I get patted down by security and my bag checked…all the while still holding my beer, unbelievable. Although, I did have to dispose of it, well actually drink it all, just before exiting a little roped of section after the turnstiles. 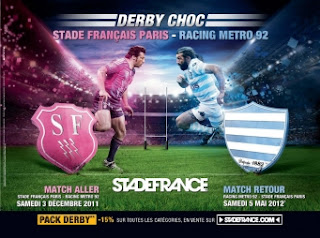 Benoît, however, was more impressed with the efficiency of the whole process of us getting in, very un-French. “We can get more beer in the stadium can’t we?”I ask Benoît worryingly, “Bien sûr!” (Of course) he reassures me. However, I later find out that whilst you can get beer, you can’t drink it in your seat, well not at least in the section we were in – that’s no fun.

I’m getting excited now. Crowds pouring in, the buzz of a huge stadium, fans showing their allegiances including me with my newly purchased Racing Metro beanie, the smell of beer and junk food, massive concrete ramps and stairs everywhere. My memory is instantly transported to my numerous visits to the hallowed turf of the MSG, or any other great Melbournian sporting stadium. I then realise how much I have missed going to sporting events and how much that it is actually a part of me and something that I love doing. Ooo big smile and excited little claps.

We take our seats and watch what could only be described as ‘hilarious’ pre-match entertainment. Not only was I having fond memories of being at the ‘G’, but I was suddenly lurched back to the 1991 AFL Grand Final. A whole stream of Hell’s Angels type bikkies stream into the stadium on their fat Harley Davidsons encircling the pitch, whilst a woman dressed in a black sequence one piece suit with giant bat wings flies in on a harness and hand some French celebrity the match ball. Then bursts of flames erupt as Stade Français cheer girls run onto the field and shake their bootie. Ha ha I was cracking up.

Following this, I am very ashamed to admit, I did something very un-Australian, I performed the Haka. Yes, you read correctly. In an attempt to set a world record for the largest number of people performing a Haka, I participated in the warm-up practice runs, and then the final Haka. I turned to Benoit and said “If I get caught doing this, the Australian consulate will withdraw my passport and I’ll never be able to return”. In my defence, I can only say that I was doing it for a good cause. The French version of the Haka cleverly included us reciting the phone number for a massive charity telethon they were to hold the following day.

So with the Harleys, bats and charity promoters gone, the game got underway. I won’t bother with giving you any sort of description, only to say that Racing Metro got thrashed. Chabel did tackle one bloke and nearly carried him 10 metres before landing on top of him…ok I’m exaggerating, it was more like 3 metres, but it was both amazing and funny. Then, he later dropped what would be described in Aussie parlance as an “absolute sitter”.

Given that ‘my’ side were now underperforming, I drew my attention other things that were happening, such as a Frenchman flouting the rules and smoking about 8 cigarettes in the row in front of me during the game. Or, when the rain started, those not under shelter simply whipped out their umbrellas; too bad for those behind them. But my favourite thing was the little remote control car of the Stade Française team, in the club’s hot pink, that zooms out onto the pitch to deliver the tee for the ball on a penalty kick or conversion, and then zooms back. “That’s the job I want!” I told Benoît, “I want to be the remote control car operator”. Final score 29 – 3.

The sporting fun didn’t stop there though. The very following weekend I participated in a 10 km fun run near my place. The Corrida de Nöel, is a Christmas themed race, with a number of different race distance to choose from, however, the most popular race is Race 5. The one where you dress as Santa and run with about 3,000 other Santas.

Given the fact that I was going to miss my traditional Christmas day cycle back in Melbourne, where I dress up in the festive theme with my friends in order to be silly and ride down Beach Road, I thought this was the perfect opportunity to embody the French fun sporting spirit.

Also, me being me, I decided to institute my French Triathlon Club’s inaugural “Best Christmas Costume” award as worn by one of the club members in the race.  The club member voted the best at the Club’s Christmas drinks the following week would hold the esteemed title of being the first winner in the club’s history.

We all gathered on an absolutely freezing Sunday morning of about 3 degrees. There were lots of Santas. My friend Rich came as sporty Santa, Andrea was sexy Mrs Clause, another club member was a reindeer and I….well I came as an Elf.

I was voted equal first with the reindeer, but as a nice little Santa's helper, I graciously handed the prize to Rudolph.

The race was a lot of fun, and this little elf passed a hell of a lot of Santas. There were also some amazing people running along with carriages, similar to horse racing harnesses, carrying disable people for charity. Luckily I was told only moments before the race about a ‘nasty little hill’ that I’d have to run twice. Nasty it damn was, 700m of it, and just when you think you’ve reached the crest, it turns and climbs further. My little elf heart was ready to burst, and there were some spectators on the hill blasting the song ‘Eye of the Tiger’ to all the runners. I couldn’t work out whether they were trying to inspire us, or were being sarcastically funny.

Of course, this being France, it meant that other people also took the liberty to dress up as something other than Santa. Batwoman appeared again, so did a swash buckling pirate who I seemed to be running with for a majority of the race. The best costume of all though was perhaps the lads that had no costumes and came as very naked reindeers.

In true French style, not only did I receive a commemorative t-shirt and medal, I also got a bottle of wine as I finished. Not to mention, if I wanted, a little tipple of hot wine at the end to warm me up. All for €15 entry fee.

So what France lacks in sporting prowess, they certainly make up for with fun and enthusiasm.

However, what is particularly great is that there is a legitimate way of signing off on correspondence when it has anything to do with sports. Sportivement, meaning ‘sportingly’, and so with that….