The day that Colnago America is frantically packing the last of the pallets to be shipped to Interbike 2013 in Las Vegas was perhaps not the most ideal time to visit the head quarters and pick up loner bike so I can scoot around Chicago town. 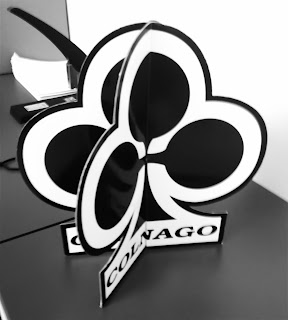 Colnago, the famed Italian bike brand’s American HQ, is in a nondescript multi-story brick building. Pressing the intercom for the corresponding business at the front door renders no speech but a buzz and release of a latch to let me. Up four flights of stairs and yet another intercom. I repeat the same process.

“I’m here about a bike”, three men madly dashing around carrying boxes briefly glance my way. A quick mumble and suggestion to wait in the office for a few minutes while they finish was said in my general direction.

I step into the uber open plan converted warehouse office, with expose brick and beams on the ceiling, where frames and bikes, tyres, saddles abound amongst the winning Tour de France wall sized posters.

After admiring the time trial bike, the cyclocross bike and every other frame in detail, Billy walks in heads straight for the kitchen, pours a huge glass of water, walks back over to me and asks how tall I am. He steps out of office and returns with a matt black 2013 M10. It only shares top spot in the Colnago range with the C59 Italia. Oh if I must…I suppose I could slum it for a few weeks. 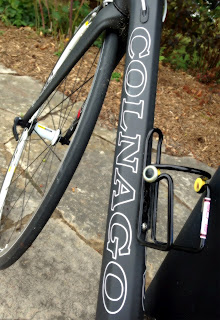 As he tightens the brakes, I ask if he happens to have a shorter head stem. At 110mm, I was almost certain it was going to yoga routine in the bike just so I could reach the handlebars. “You won’t need it” he states matter of factly. Not one to look a gift horse in the mouth I wheel my trusty new steed away, knowing full well that I was going to need something shorter. I grimaced as I take a look at the narrow, hard as a brick saddle. This is going to hurt.

Sure enough the next 30 minute and 44 second transfer to where I was staying was the most excruciating of my life on a bike. It left me bruised and battered for days.

The very next morning, I was straight down at my local bike store, Johnny Sprockets Chicago to purchase 1 Specialized Jett Saddle and 1 80mm head stem. Fitted instantly, the air filled with sound of angels harking and white light enveloping Cyril…heaven.

Chicago makes Melbourne seem hilly and Sydney positively the French Alps it is that flat. I might as well be riding a fixie. The two gear changes I make really don’t seem all that worthwhile. That’s not a bad thing, Cyril fitted with Sram Force, I feel like a cobbler with my tapping…click click clunk…then big sweep back to gear up, ‘deft touch’ is not a phrase suitable for description in Sram’s catalogue.


Chicago’s 50km/hr winds riding the Lakeshore trail is fun one way and a chore the other.

Still, there is some spectacular scenery to be enjoyed along the way, particularly as you are running the gauntlet to try to time your passing of the sometimes ferocious Lake Michigan.